DVD
DVD
August 7, 2006
ISBN 9781593853853
Price: $80.00
47-Minute DVD
order
See related items for this product
Check out a sample clip from the DVD! This video is presented by Guilford Publications in cooperation with Monkey See Productions, New South Wales, Australia. Not available from Guilford in Australia or New Zealand.
“This is the best educational video on bipolar disorder I have seen....The video's message is consistently clear: individuals can gain better control over the illness and live satisfying lives. This empowering and much-needed message is not heard often enough in our field. I plan to recommend this program to other clinicians and trainees, as well as clients.”


“Through the voices of six individuals who speak with candor and wisdom about their illness, this video provides an honest and poignant window into the complicated journey of living life with a chronic mood disorder. The filmmakers cover a range of significant issues, such as early warning signs of recurrence, medications and their side effects, the importance of family and peer support, and the negative effects of marijuana and alcohol on mood. Perhaps more importantly, this film succeeds in giving a human face to bipolar disorder. Viewers who themselves suffer from the illness will identify with the interviewees' struggles to accept their diagnosis, to make lifestyle choices that accommodate their disorder, and to adhere to prescribed medications despite side effects. I would recommend Living Well with Bipolar Disorder to those who suffer from the illness and their family members and concerned friends who want to learn more about how to cope successfully with bipolar disorder over a lifetime.”

—Holly A. Swartz, MD, Department of Psychiatry, University of Pittsburgh School of Medicine


“This video conveys a rich and accurate account of living with bipolar disorder. It is drawn almost entirely from interviews with individuals affected by the disorder, and they speak with the authority of first-hand experience. The film addresses such topics as medication, early warning signs, marijuana and alcohol, life style, counseling, support groups, and family and friends. Each of these areas is explored with an appreciation of both its importance and its complexity. The overall focus is on what the individual can do to control and manage the disorder. As one person in the video states, 'the illness doesn't have to control you: you can control it.' This is a video that is both realistic and hopeful. It treats its subjects with respect and allows them to speak for themselves, and they do so with great eloquence.” 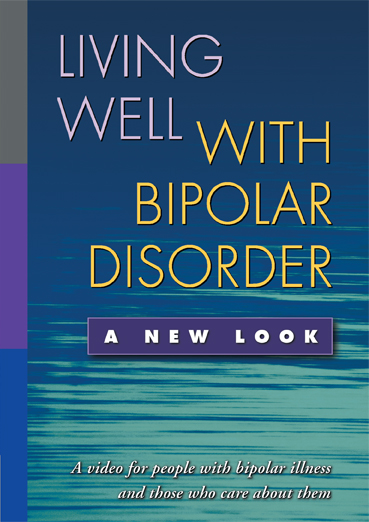