HardcoverPaperbacke-bookprint + e-book
Hardcover
July 14, 2008
ISBN 9781593858308
Price: $84.00
224 Pages
Size: 7" x 10"
order
Paperback
April 20, 2010
ISBN 9781606238691
Price: $34.00
224 Pages
Size: 7" x 10"
order
e-book
March 1, 2011
ePub ?
Price: $34.00
224 Pages
order
print + e-book
Paperback + e-Book (ePub) ?
Price: $68.00 $37.40
224 Pages
order
Gillian Butler, PhD, an Associate of the Oxford Cognitive Therapy Centre, is a Fellow of the British Psychological Society and a Founding Fellow of the Academy of Cognitive and Behavioral Therapies. She has conducted research on CBT for anxiety disorders and has a special clinical interest in the use of CBT during recovery from childhood trauma. Dr. Butler is the author of Overcoming Social Anxiety and Shyness, Manage Your Mind: The Mental Fitness Guide, Psychology: A Very Short Introduction, and other books. With colleagues from the Oxford Cognitive Therapy Centre (including Melanie Fennell and Ann Hackmann), she is a coeditor of the Oxford Guide to Behavioural Experiments in Cognitive Therapy.

Melanie Fennell, PhD, is Director of the University of Oxford Diploma/MSc in Advanced Cognitive Therapy Studies and is a research therapist in Oxford's Department of Psychiatry. She will also codirect a new Master of Studies in Mindfulness-Based Cognitive Therapy program. Dr. Fennell has contributed to the development of treatment protocols for depression and for a range of anxiety disorders, and has published widely on CBT for depression and low self-esteem. In 2002, she was voted "Most Influential Female UK Cognitive Therapist" by the membership of the British Association of Behavioural and Cognitive Psychotherapies.

Ann Hackmann, PhD, until her death in 2017, was a Consultant Clinical Psychologist at the Oxford Cognitive Therapy Centre and the Department of Psychiatry, University of Oxford. She has worked for over 20 years in a research group specializing in the development of cognitive therapy protocols for anxiety disorders. She was particularly interested in working with imagery in cognitive therapy, and published widely on this topic. Dr. Hackmann provided teaching and training in cognitive therapy in many national and international settings, and was a Founding Fellow of the Academy of Cognitive and Behavioral Therapies.
X 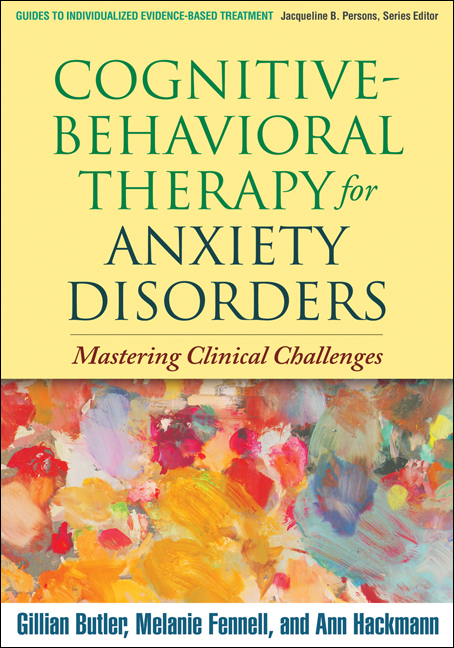