Insider's Guide to Graduate Programs in Clinical and Counseling Psychology

HardcoverPaperback
Hardcover
February 18, 2022
ISBN 9781462548538
Price: $70.00
464 Pages
Size: 8.5" x 11"
pre-order
Paperback
February 18, 2022
ISBN 9781462548477
Price: $29.95
464 Pages
Size: 8.5" x 11"
pre-order
The new edition will be published February 18, 2022. If you need this title before then, please see the previous edition.
John C. Norcross, PhD, ABPP, is Distinguished Professor of Psychology at the University of Scranton, Adjunct Professor of Psychiatry at the State University of New York Upstate Medical University, and a board-certified clinical psychologist. Past president of the Division of Clinical Psychology and Division of Psychotherapy of the American Psychological Association (APA), he has served on the APA’s governing Council of Representatives and the Board of Educational Affairs. With more than 400 scholarly publications, Dr. Norcross is a recipient of the Distinguished Career Contribution to Education and Training Award from the APA and the Pennsylvania Professor of the Year Award from the Carnegie Foundation, and is a Distinguished Practitioner of the National Academies of Practice. Dr. Norcross has conducted workshops and research on graduate study in psychology for many years. 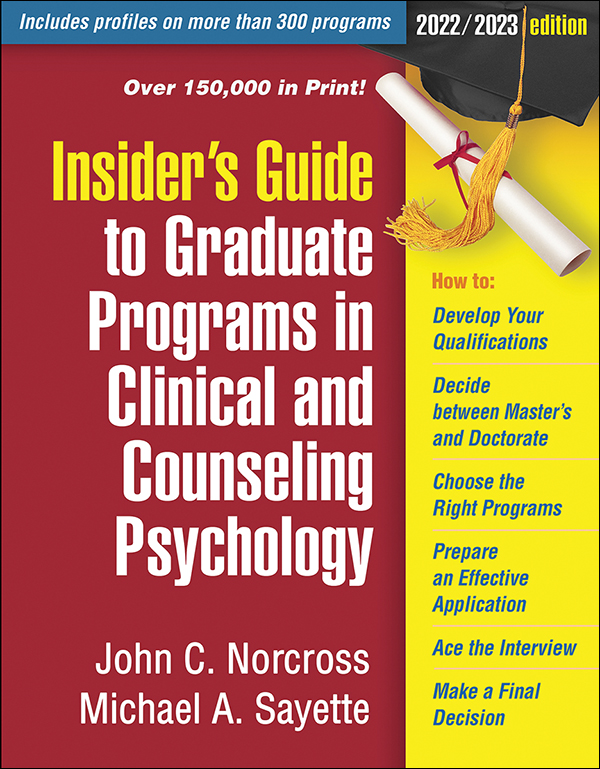