Hardcovere-bookprint + e-book
Hardcover
July 8, 2020
ISBN 9781462543472
Price: $42.00
366 Pages
Size: 6" x 9"
order
e-book
June 12, 2020
ePub and PDF ?
Price: $42.00
366 Pages
order
print + e-book
Hardcover + e-Book (ePub and PDF) ?
Price: $84.00 $46.20
366 Pages
order
Alicia F. Lieberman, PhD, is Irving B. Harris Endowed Chair in Infant Mental Health and Professor and Vice Chair for Faculty Development in the Department of Psychiatry at the University of California, San Francisco (UCSF). She is Director of the UCSF Child Trauma Research Program at Zuckerberg San Francisco General Hospital (ZSFGH) and Director of the Early Trauma Treatment Network. Dr. Lieberman is the senior developer of Child–Parent Psychotherapy (CPP). She is the author of The Emotional Life of the Toddler, for general readers, as well as professional books, articles, and chapters on childhood exposure to violence, mental health in infancy and early childhood, child–parent attachment, and cultural competence in intervention. Her cross-cultural background as a Jewish Latina informs her work with diverse children and families. Dr. Lieberman has received numerous awards including, most recently, the René Spitz Award from the World Association for Infant Mental Health, the Hero Award from the San Francisco Department of Public Health, the Whole Child Award from the Simms/Mann Institute, the Blanche Ittleson Award from the Global Alliance for Behavioral Health and Social Justice, and the Paulina Kernberg Award from Weill Cornell Medicine.

Manuela A. Diaz, PhD, is a clinical psychologist in private practice in Berkeley, California, where she specializes in maternal and infant mental health and the application of mindfulness and neuroscience to the treatment of mood disorders and trauma. Dr. Diaz is an affiliated clinician at the University of California, San Francisco (UCSF), Child Trauma Research Program at Zuckerberg San Francisco General Hospital. Since the early 2000s, she has conducted clinical work and research in the area of perinatal mental health. She is a coauthor of the Mothers and Babies course, a maternal depression prevention program developed at UCSF, and a codeveloper of Perinatal Child–Parent Psychotherapy. Dr. Diaz has served as a trainer both nationally and internationally, in English and Spanish, and has published on reducing mental health disparities for racial and ethnic minority groups.

Gloria Castro, PsyD, a clinical psychologist and Certified Sexual Assault Counselor, is a bilingual psychotherapist at the University of California, San Francisco, Child Trauma Research Program at Zuckerberg San Francisco General Hospital. In this role, she implements Perinatal Child–Parent Psychotherapy throughout pregnancy, labor, delivery, and postpartum with women with histories of traumatic experiences. She also provides infant mental health services in the neonatal intensive care unit and the high-risk pediatric Kempe Clinic. Dr. Castro's interests include the impact of immigration on family systems, the intergenerational transmission of trauma, and the impact of trauma on children’s development. She has consulted for, supervised, and trained mental health providers who work with immigrant families and their children, and has presented her work nationally and internationally.

Griselda Oliver Bucio, LMFT, is a psychotherapist in private practice in Walnut Creek, California. For over 14 years, she was a staff clinician and clinical supervisor at the University of California, San Francisco, Child Trauma Research Program at Zuckerberg San Francisco General Hospital, where she also participated in clinical research. Ms. Oliver Bucio specializes in the treatment of young children exposed to trauma and of pregnant women exposed to domestic violence and other traumatic events. She has served as a Child–Parent Psychotherapy (CPP) trainer and consultant since 2010, leading trainings and presentations nationally and internationally in both English and Spanish. Her major interests include infant mental health, the impact of early trauma within the dyadic relationship and pregnancy, disorders of attachment, the effects of paternal absence, the process of immigration in Latino families, and the dissemination of CPP and Perinatal Child–Parent Psychotherapy (P-CPP).
X 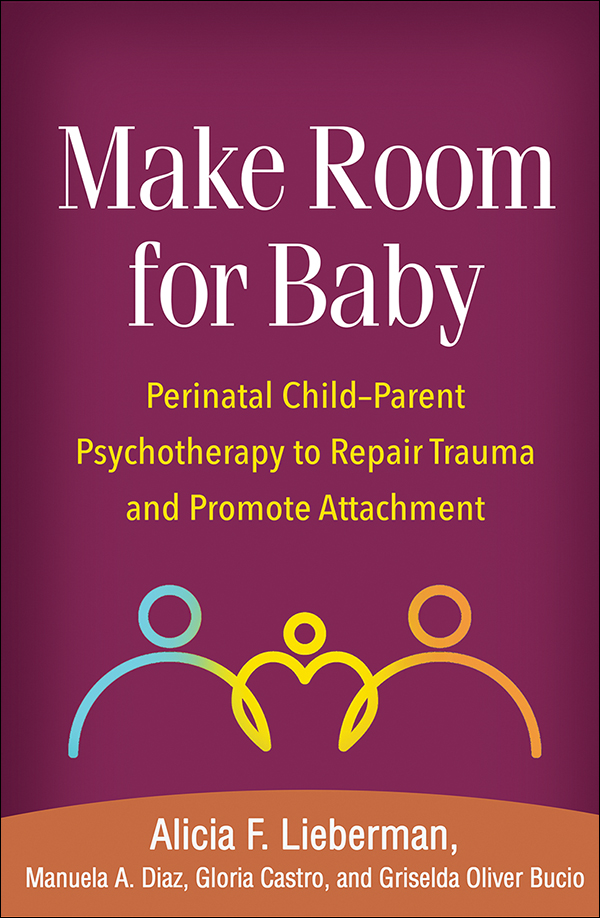