HardcoverPaperbacke-bookprint + e-book
Hardcover
December 19, 2006
ISBN 9781593853716
Price: $86.00 $64.50
262 Pages
Size: 6" x 9"
order
Paperback
December 18, 2007
ISBN 9781593857172
Price: $36.00 $27.00
262 Pages
Size: 6" x 9"
order
e-book
March 1, 2011
ePub ?
Price: $36.00 $27.00
262 Pages
order
print + e-book
Paperback + e-Book (ePub) ?
Price: $72.00 $39.60
262 Pages
order
“Outstanding. Based on over 20 years of empirical literature and clinical experience, this second edition is a 'must read' for mental health professionals and researchers. Dutton goes beyond social stereotypes and superficial explanations to compassionately and eloquently describe the complex relationship among biological, developmental, psychological, and social factors contributing to the development of the abusive personality. With a solid foundation in the etiology of violent behavior, readers also learn about Dutton's highly effective perpetrator intervention program. The book will be accessible both to seasoned clinicians and to students, interns, and newly licensed professionals. What is most exciting and unique about this second edition is its incorporation of the most recent findings on neurobiology and attachment theory into a comprehensive theory of the development and treatment of the abusive personality.”


“What sets this book apart from others is that Dutton goes to the core of partner violence by addressing individual psychopathology. He convincingly argues that abusive men have significant personality problems with origins in their early development, and he uses object relations and attachment theory to provide excellent clinical descriptions of how an individual becomes an abuser. This is important reading for any clinician or researcher interested in the psychology of battering.”


“Dutton's formulations are the product of a first-rate scientific mind informed by decades of empirical research. He brings scientific rigor and intellectual clarity to his writing, which is both scholarly and compelling. With this second edition, Dutton solidifies his position as one of the world's most eminent domestic violence researchers.”


“Dr. Dutton's outstanding work traces 20 years of empirical history examining partner violence from childhood to adulthood and then presents practical programs to meet the needs of patients suffering from abusive personality disorders. This book will not only appeal to the scholarly scientific mind of a well-seasoned therapist but will inform students just beginning in the field. The second edition has incorporated recent findings in neurobiology and developmental theory, which has been updated to include chapters on trauma research and abuse in females. I highly recommend it for any practitioner working with abusive personality disorders.” 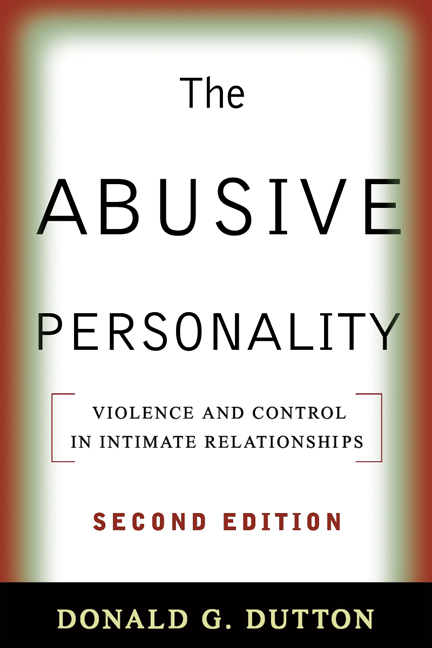