Paperbacke-bookprint + e-book
Paperback
March 4, 2009
ISBN 9781606230374
Price: $39.00
226 Pages
Size: 6" x 9"
order
e-book
March 1, 2011
ePub ?
Price: $39.00
226 Pages
order
print + e-book
Paperback + e-Book (ePub) ?
Price: $78.00 $42.90
226 Pages
order
“Tyner examines the intimate connections between populations and political violence, and makes a timely contribution to the field of population geography that scholars from a wide range of disciplines will be obliged to take into account for many years....This book breaks new ground in the subfield of population geography....I found Tyner's analysis visually rigorous....Tyner's work is thoughtful and engaging....Warrants wide acclaim and an audience well beyond the academy and to the many of us concerned with bodies and militarized violence.”


“A principled and passionate analysis of the intimate connections between populations and political violence. Tyner's case studies of Vietnam, Cambodia, and Rwanda are vivid and searching demonstrations of the public importance of a critical population geography, and deserve an audience far beyond the academy.”


“Tyner identifies valuable connections between population geography and poststructural and postcolonial theory, and helps scholars understand how particular forms of knowledge have legitimated and perpetuated specific geographies and histories of violence. This is an important book not only for what it contributes to the political vocabulary of population geography, but even more strikingly, for how it pushes forward understanding of the spatial politics of state-sanctioned violence and genocide.”

—Rachel Silvey, Department of Geography and Programme in Planning, University of Toronto, Canada


“Inspiring case-study chapters focused on Vietnam, Cambodia, and Rwanda pull no punches as they illustrate how bodies are disciplined and populations regulated through practices such as rape, the targeting of civilians, and ethnic cleansing. This is bold and compelling scholarship that will spark discussion and debate in courses on population and globalization, human geography, political economy, gender and critical race studies, and social justice and activism. The combination of theoretical depth and empirical breadth makes this the rare type of book that can be successfully used alongside journal articles or media material.”


“Thisis one of the few books to connect contemporary demographic concerns to critical geopolitics. Tyner shows that recent theoretical developments in geography, especially around the body and biopolitics, are crucial for reinvigorating both the ethical commitments and analytical precision of the discipline. His evocative case studies compel geographers to consider how questions of human population, sadly, are never far removed from questions of war.”


“Tyner unpacks a rather overwhelming set of issues and questions related to the disciplining of bodies and the regulation of populations through acts of violence, in an exceptionally clear, straightforward, and compelling way. This book is marked by innovative and original scholarship from beginning to end. Highly readable, it will appeal to both scholars and students interested in issues related to social injustice and mass violence.” 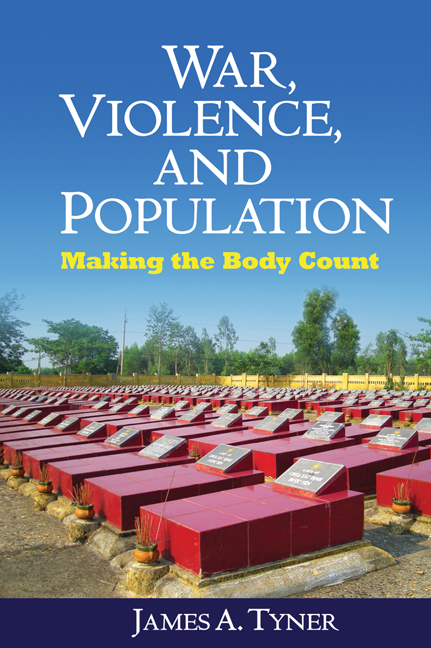