Paperback
Paperback
February 13, 2001
ISBN 9781572306363
Price: $50.00
414 Pages
Size: 6" x 9"
order
“This is a path-breaking study of welfare restructuring by a radical scholar of international repute. Peck offers a thorough, well grounded, and politically committed critique of the origins, the discourses, the general strategic line, the local variations, the policy turnover, the failures, and the sorry consequences of the current workfare offensive in the United States. He is equally devastating on attempts to develop workfare states in Canada and Britain. He concludes by calling for the reform of work to replace punitive treatment of those without it.”


“In Workfare States, Peck maps out the complex political geography of the shift from welfare to workfare. He traces workfare as a political and ideological project, from its origins in 'welfare to work' experiments starting in the Reagan years, to the radical U.S. welfare legislation of 1996, and then to the creation of a new global regulatory model that is already reshaping welfare in Canada, the UK and beyond. Peck is a lucid and reliable guide, and his account is indispensable for understanding the new politics of welfare.”

—Fred Block, Department of Sociology, University of California at Davis


“Peck is the most important intellectual writing about workfare today. No one else writes with such penetrating insight and clarity. Analytically rigorous, yet accessible to the nonexpert reader, this book is an important contribution for anyone who wishes to understand workfare, its current trajectory, and possible futures. In addition to scholars and students, it will be an invaluable resource for those of us confronting workfare on the front lines.” 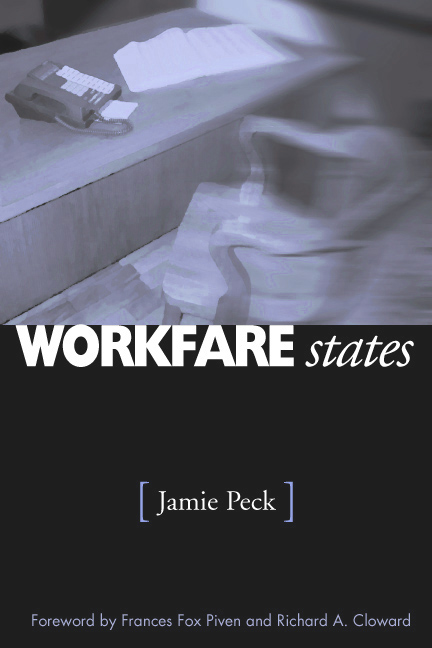