Hardcover
Hardcover
May 12, 2004
ISBN 9781593850029
Price: $83.00
588 Pages
Size: 6⅛" x 9¼"
order
Jay Folberg is Professor and former Dean at the University of San Francisco School of Law. He served as president of the Association of Family and Conciliation Courts and the Academy of Family Mediators, as well as chair of the ADR Section of the Association of American Law Schools. Professor Folberg was honored by the California Judicial Council for his leadership in alternative dispute resolution and received the Academy of Family Mediators' Distinguished Mediator Award and the Mediation Society's Distinguished Contribution to Mediation Award.

Ann L. Milne is in private practice in Madison, Wisconsin, as a family and divorce mediator. She served as Executive Director of the Association of Family and Conciliation Courts and is currently on the faculty of the Department of Professional Development and Applied Studies at the University of Wisconsin.

Peter Salem is Executive Director of the Association of Family and Conciliation Courts and teaches mediation at Marquette University Law School. He formerly served as director and mediator at Mediation and Family Court Services in Rock County, Wisconsin. Mr. Salem has produced educational and training videotapes on mediation and divorce.
X 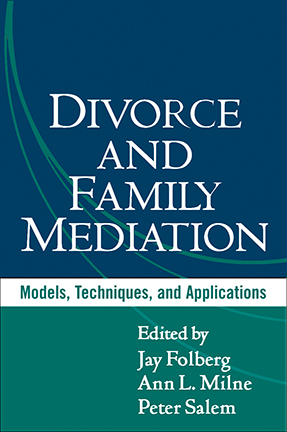