Paperback
Paperback
October 31, 2001
ISBN 9781572307322
Price: $51.00
478 Pages
Size: 6⅛" x 9¼"
Copyright Date: 1998
order
Richard P. Swinson, MD, is Professor and Chair of the Department of Psychiatry, Faculty of Health Sciences, McMaster University. He is also Professor in the Department of Psychiatry at the University of Toronto, and Psychiatrist in Chief at St. Joseph's Hospital and Hamilton Psychiatric Hospital in Hamilton, Ontario. Previously, he held several appointments at the Clarke Institute of Psychiatry, including Vice President Medical Affairs, Chief of Medical Staff, and Head of the Anxiety Disorders Clinic. Dr. Swinson is currently chair of the Examination Board in Psychiatry for the Royal College of Physicians and Surgeons in Canada. He has published approximately 200 scientific papers, book chapters, and reports, mostly on anxiety disorders and related conditions. In addition, he was a member of the DSM-IV subcommittees for obsessive-compulsive disorder and for panic disorder and agoraphobia.

Martin M. Antony, PhD, is Professor of Psychology at Toronto Metropolitan University in Toronto, Ontario, Canada, and Provincial Clinical and Training Lead for the Ontario Structured Psychotherapy Program. Previously, Dr. Antony was founding director of both the Anxiety Treatment and Research Clinic and the Psychology Residency Program at St. Joseph’s Healthcare Hamilton. He has published over 300 scientific articles and chapters and 33 books in areas related to cognitive-behavioral therapy and anxiety-related disorders, and has presented his work widely across four continents. A Fellow of the Royal Society of Canada, he is past president of the Canadian Psychological Association and the Association for Behavioral and Cognitive Therapies.

S. Rachman, PhD, is Professor Emeritus in the Department of Psychology at the University of British Columbia, Canada, and Professor Emeritus at the Institute of Psychiatry, University of London, United Kingdom. Recognized as a leader in the research and treatment of obsessive–compulsive disorder and other anxiety disorders, he is a recipient of the Lifetime Achievement Award from the British Psychological Society, among many other honors.

Margaret A. Richter, MD, received her M.D. from the University of Ottawa and completed her psychiatric training at the University of Toronto. She was named the Mary Early Fellow by the Canadian Psychiatric Research Foundation from 1990-1992 for her work on the familial nature of OCD. Currently, she is Assistant Professor in the Department of Psychiatry, University of Toronto, and Staff Psychiatrist in the Anxiety Disorders Clinic, Clarke Institute of Psychiatry. She continues to be actively involved as a clinician and research in the area of OCD, particularly with respect to the genetic basis of OCD and the relationship between OCD and spectrum disorders.
X 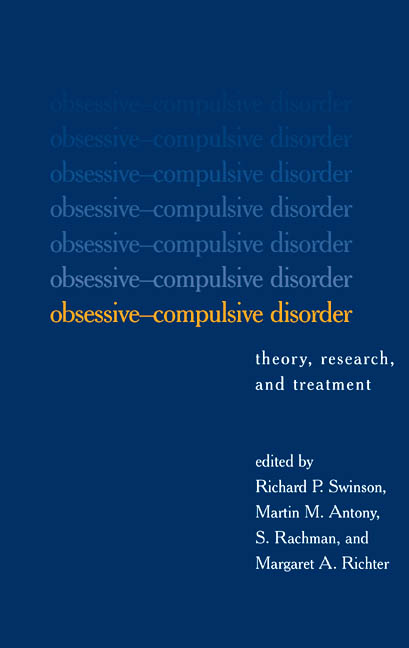