The Right to the City

Social Justice and the Fight for Public Space

A Paperback Originale-bookprint + e-book
A Paperback Original
February 24, 2003
ISBN 9781572308473
Price: $36.00
270 Pages
Size: 6" x 9"
Illustrations: 18 black-and-white photos, 1 map
order
e-book
February 21, 2012
ePub and PDF ?
Price: $36.00
270 Pages
Illustrations: 18 black-and-white photos, 1 map
order
print + e-book
A Paperback Original + e-Book (ePub and PDF) ?
Price: $72.00 $39.60
270 Pages
order
Professors: free copies available for adoption consideration
Download an e-book copy now or order a print copy
“In this wide-ranging tour de force, Don Mitchell offers us a rich and geographically grounded exploration of struggles over urban public space. This is scholarship in the best sense of the word: politically engaged, theoretically informed, and powerfully argued. Urban public space emerges not only as a site of brutal and often violent control, but also as a space of liberation and hope. Mitchell shows us that public spaces—the streets and parks of the everyday—matter, and are worth fighting for.”


“Don Mitchell packs a wallop like the pamphleteering Marx. Polemical, stirring, and angry, this book is required reading for anyone who cares about the fate of our cities and our fragile democracy.”


“This provocative work asserts that the right to public space is crucial to advancing the cause of justice. Complex yet comprehensible, the book balances the ideas of legal scholars, cultural theorists, and social scientists with Mitchell's singular voice based on his extensive thinking and research in the area. Mitchell thoughtfully argues that the struggle for rights actually produces public space and thus insists that rights be taken seriously, especially by leftist scholars, as they are central to counteracting exclusionary practices and the pervasive power of the state. This book is especially appropriate for advanced undergraduate and graduate courses on the city.”

—Sallie A. Marston, Department of Geography and Regional Development, University of Arizona
X 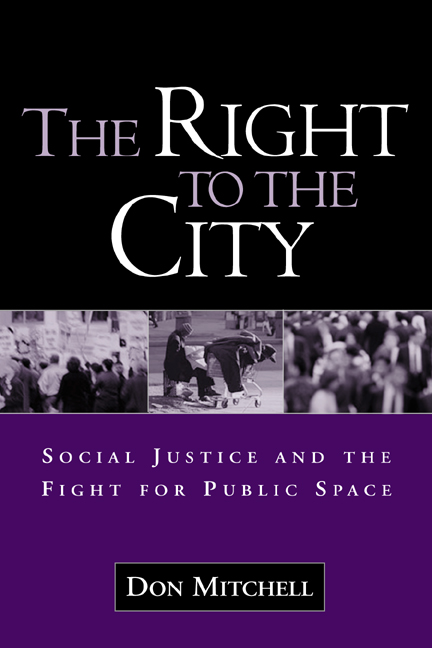