What Science Tells Us about Autism Spectrum Disorder

Making the Right Choices for Your Child

HardcoverPaperbacke-bookprint + e-book
Hardcover
February 5, 2020
ISBN 9781462541379
Price: $52.00
328 Pages
Size: 6" x 9"
order
Paperback
February 5, 2020
ISBN 9781462536078
Price: $16.95
328 Pages
Size: 6" x 9"
order
e-book
December 6, 2019
ePub and PDF ?
Price: $16.95
328 Pages
order
print + e-book
Paperback + e-Book (ePub and PDF) ?
Price: $33.90 $18.64
328 Pages
order
Read a Q&A with featured author, Raphael A. Bernier!
Raphael A. Bernier, PhD, is Affiliate Professor of Psychiatry and Behavioral Sciences at the University of Washington (UW), where he was formerly Associate Director of the Center on Human Development and Disability and the William J. and Lydia N. Gumerman Endowed Chair in Child Psychiatry. He was also formerly Executive Director of the Seattle Children's Autism Center. Dr. Bernier is an active clinician and researcher whose work focuses on how autism develops, how the brain is involved, and ways to improve the quality of life of individuals with autism spectrum disorder and their families. He is the author of more than 100 scientific articles and book chapters.

Geraldine Dawson, PhD, is the William Cleland Professor of Psychiatry and Behavioral Sciences, Director of the Duke Institute for Brain Sciences, and Director of the Duke Center for Autism and Brain Development at Duke University. She served as Founding Director of the University of Washington Autism Center. An internationally recognized autism expert with a focus on early detection, intervention, and brain plasticity in autism, Dr. Dawson is a passionate advocate for families. She is codeveloper of the Early Start Denver Model, the first empirically validated comprehensive intervention for toddlers with autism. Dr. Dawson is coauthor of the parent resources , An Early Start for Your Child with Autism, and A Parent's Guide to High-Functioning Autism Spectrum Disorder, Second Edition. Her books for professionals include Early Start Denver Model for Young Children with Autism. Dr. Dawson is a Fellow of the American Psychological Society and the American Psychological Association. She is a recipient of the Lifetime Achievement Award from the Association for Psychological Science and awards for Valuable Service and Research Contributions from the Autism Society of America.

Joel T. Nigg, PhD, is Director of the Division of Psychology and Professor of Psychiatry, Pediatrics, and Behavioral Neuroscience at Oregon Health and Science University. He is widely recognized for his research on the neuropsychological and biological correlates of children’s neurodevelopmental problems, including work on developmental connections of attention-deficit/hyperactivity disorder (ADHD) and autism spectrum disorder. Dr. Nigg is a Fellow of the Association for Psychological Science and past president of the International Society for Research in Child and Adolescent Psychopathology. He is the author or coauthor of two books for parents: Getting Ahead of ADHD and .
X 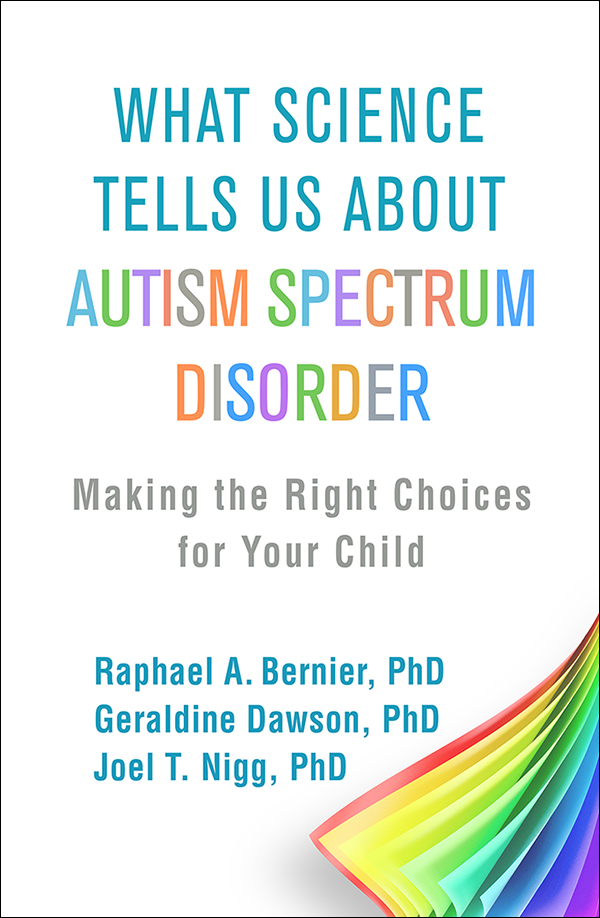