Scientific Foundations of the DSM-V and ICD-11

Hardcovere-bookprint + e-book
Hardcover
February 25, 2010
ISBN 9781606235324
Price: $110.00
622 Pages
Size: 7" x 10"
order
e-book
August 3, 2011
ePub ?
Price: $110.00
622 Pages
order
print + e-book
Hardcover + e-Book (ePub) ?
Price: $220.00 $121.00
622 Pages
order
Theodore Millon, PhD, DSc, until his death in 2014, was Dean and Scientific Director of the Institute for Advanced Studies in Personology and Psychopathology. He was Founding Editor of the Journal of Personality Disorders and inaugural president of the International Society for the Study of Personality Disorders. Dr. Millon held full professorial appointments at Harvard Medical School, the University of Illinois, and the University of Miami. A prolific author, he wrote or edited more than 30 books on theory, assessment, and therapy, as well as more than 200 articles and book chapters, and developed the widely used Millon Clinical Multiaxial Inventory (MCMI). He was a recipient of the Gold Medal for Life Achievement in the Application of Psychology from the American Psychological Foundation, which annually presents the Theodore Millon Award in Personality Psychology in his honor.

Robert F. Krueger, PhD, is Distinguished McKnight University Professor at the University of Minnesota. His research interests lie at the intersection of psychopathology, personality, psychometrics, behavior genetics, and physical health. Dr. Krueger is the recipient of awards including the Hoch Award from the American Psychopathological Association. He is coeditor of the Journal of Personality Disorders.

Erik Simonsen, MD, is Director of Psychiatric Research in Region Zealand, Denmark; Director of the Institute of Personality Theory and Psychopathology; and Associate Research Professor at the University of Copenhagen. He has published widely on personality disorders, first-episode psychosis, personality assessment, outcome of psychotherapy, and psychiatric classification. Dr. Simonsen is past president of the ISSPD and a recipient of the ISSPD Award. He has also served as president of the Section on Personality Disorders of the World Psychiatric Association.
X 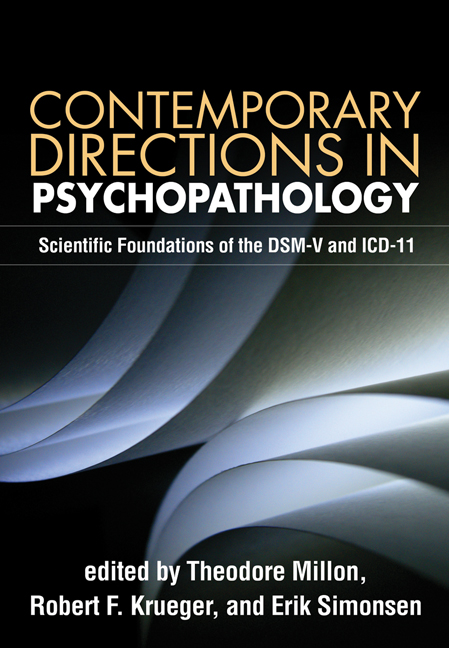