A Paperback Original
A Paperback Original
February 15, 2016
ISBN 9781462524877
Price: $180.00
124 Pages
Size: 8" x 10½"
Convenient Wire Binding
order
See related items for this product
Technical Information
The ADHD Rating Scale–5: Home Version and School Version are rating scales based on the diagnostic criteria for ADHD as described in the fifth edition of the Diagnostic and Statistical Manual of Mental Disorders (DSM-5). Both versions of the ADHD Rating Scale–5 consist of two symptom subscales, Inattention (9 items) and Hyperactivity–Impulsivity (9 items), as well as a Total Scale (18 items). In addition, the ADHD Rating Scale–5 assesses six domains of impairment that are common among children with ADHD: relationships with significant others (family members for the home version and teachers for the school version), peer relationships, academic functioning, behavioral functioning, homework performance, and self-esteem. When using the ADHD Rating Scale–5, respondents complete each set of impairment items twice, first after rating the inattention symptom items and again after rating the hyperactivity–impulsivity items. The Home Version of the scale is available in English and Spanish. Both versions of the ADHD Rating Scale–5 have separate forms for children (ages 5–10 years) and adolescents (ages 11–17 years) that incorporate age-appropriate symptom descriptions as per DSM-5. The normative sample included 2,079 parents, each of whom rated one child in their family, and 1,070 teachers, each of whom rated one boy and one girl randomly selected from their classrooms. The demographic characteristics of the normative sample for both the home and school versions of the scale closely correspond with 2013 estimates of U.S. census data. Scoring templates are provided that convert raw scores to percentile scores as a function of child gender and age group (5–7, 8–10, 11–13, 14–17 years).

Validity
The factorial validity of the ADHD Rating Scale–5 was examined by confirmatory factor analyses, which strongly supported the expected two-factor structure (Inattention, Hyperactivity–Impulsivity) for both parent and teacher symptom ratings, as well as a six-factor structure for parent and teacher ratings of impairment, with each factor (consisting of two items) corresponding with one of the six domains of impairment assessed. Concurrent validity was demonstrated by the pattern of correlations between subscales on the ADHD Rating Scale–5 and corresponding scores on the Conners 3 parent and teacher rating scales, the Impairment Rating Scale rated by parents and teachers, direct observations of academic engaged time and off-task behavior, and samples of student classwork. The predictive validity and clinical utility of the scale was demonstrated by logistic regression analyses and predictive power statistics examining the ability of scores on the symptom dimensions to predict ADHD diagnostic status, as determined by a best practice multimethod assessment battery.
X 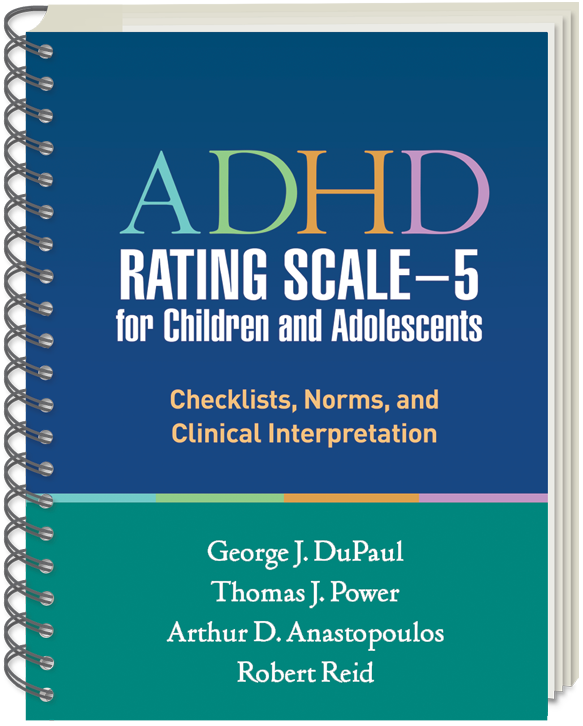